Whatever powered the truck, its noises overwhelmed Tepunia’s senses. Growling, coughing, and spewing a noxious cloud of gases, the truck surely was a machine designed to destroy outsiders. Nothing to be done. They were doomed. She huddled in Shvaart’s corner, hardly comforted by his warm, shivering body. Closing her eyes she waited for the next misfortune.

After a journey that felt as long as a trip from one of ZooCatron’s poles to the other, she heard tires screech and the truck halted. All was still, but she was alive. Where were they? She turned to sniff Shvaart. He had one paw over his eyes and was panting again. He wasn’t dead either.

Tepunia looked around. This place did not look like the farm. She saw a line of large shelters  along either side of the wide path the truck had taken. Humans, tall and short, young and older, in different shapes and coloring were walking in and out of the shelters’ doors. Machines, some like the truck, some closed on all sides, were moving along the path. Was the farm woman going to kill them now?

Their capturer slammed the door she used to enter her truck. She stomped around to the hatch, opened it, and picked up the box. Tepunia and Shvaart slid to one side and both of them yowled. Their toes had caught in the wire bottom of the box.

Naked and helpless, Tepunia made a frenzied search of the manual embedded in her brain. A solution to this predicament had to be in there somewhere. Categories flashed through her head: “Gyro Breakdown,” “Food Testing,” “Water Extraction,”—none of hundreds of chapter titles addressed their capture and threatened demise. If only her uniform were intact; she was sure these Earth humans would not have treated them so poorly.

Meanwhile, the woman was carrying them through the door of a structure into a room as bright as a comet tail. Two younger, smaller women sat behind a half-wall on one side of the room, which had many doors. They mouthed something to the woman. She dropped the box onto a wide, flat surface on top of the half-wall and said, “Two kittens…dunno…can’t keep ‘em—” and right then Tepunia‘s translator broke. Static filled her head. She tongued it to ‘off’.

The younger women looked angry and were saying something to the farm woman that made her shout and stamp her feet as she walked out of the room. Tepunia contacted Shvaart. “Look up, Lieutenant. The farm woman has left us here. We are about to be executed I fear. We must be brave and strong.”

Shvaart looked at her with wide, dark eyes, then turned toward a soft voice. One of the young women picked up the box and held it in her arms as she carried it through another door into a small, darker room. What next? thought Tepunia. Is this the execution chamber? She had little control over her body’s shaking and her drooling resumed.

After placing the box on a metal table, the young woman opened its door and, making  soft sounds, offered some delicious-smelling kibble to them with her outstretched paw. At first, neither Grimalk dared taste it. Tepunia stared at her. Shvaart, however,  unable to resist food, extended his neck and sniffed at the woman’s paw. Tepunia thought, no one offers food to a creature they’re going to kill. Maybe they intend to imprison us instead. Oh, well, one has to eat. She, too, sniffed the kibble and licked up one of them. Shvaart followed her example.

The other woman brought a folded, soft cloth and patted it onto the floor of the box. Tepunia’s claws gripped the cloth and she stretched her sore toes. Ah, much better. Shvaart was licking his paws then stopped, stared at the first woman’s still outstretched hand, and gobbled the remaining kibble. “Captain, my translator still works a bit. She calls her paw a hand. Look! The other woman is bringing us more good-smelling kibble.”

Tepunia opened her mouth a bit and sniffed. Beside the kibble, a strong odor of some sharp substance filled the air. She looked around. Nothing dangerous, nothing harmful in view—only, perhaps, these new humans; but she needed to get out of the box. Wastes were pushing against her insides. Cramps in her belly upset her and she butted her head against the box’s little door.

Amazed that the woman feeding them seemed to understand her problem, Tepunia gladly let her gentle hands lift her out of the box and carry her into a small, clean room. A box of something like waste pile material sat in one corner, water in another corner, and food on the opposite side. The room was at least 11 tail lengths in all directions and had a high ceiling.

The woman set her on the floor. Tepunia ran to the box of waste pile material and relieved herself. With quick scrapes, she buried her waste. Noticing a short stack of soft cloths near the water bowl, she slid across the hard, shiny floor, and sitting on the stack, she thought maybe, no, definitely, they were not going to die, at least not right away. The prison was clean and comfortable, but she felt so…so…alone. Where was Shvaart? What did they do with him?

The answer arrived as soon as the question arose. The same soft hands that carried her brought Shvaart to the room, then they closed its big, see-through door. Torn between food and the waste pile, Shvaart ambled over to the food dish, ate a bit, then took care of his needs.

“You forgot to bury your waste, Lieutenant. I am the Captain here. Only I can leave them out to dry—if I want to, that is.”

“They call the waste pile ‘litter,’ and my waste is just fine there. By the way, why don’t you simply call me Shvaart. We’re far from ZooCatron and our ship. We have to adapt.” He cleaned his face, settled into a fluffy, folded cloth, and with one foreleg over his face, fell asleep.

Things are different now, thought Tepunia. What’s next? Everything’s so mixed-up. She curled into her own soft cloth bed fearing she’d never relax again, but food and comfort lulled her to sleep. 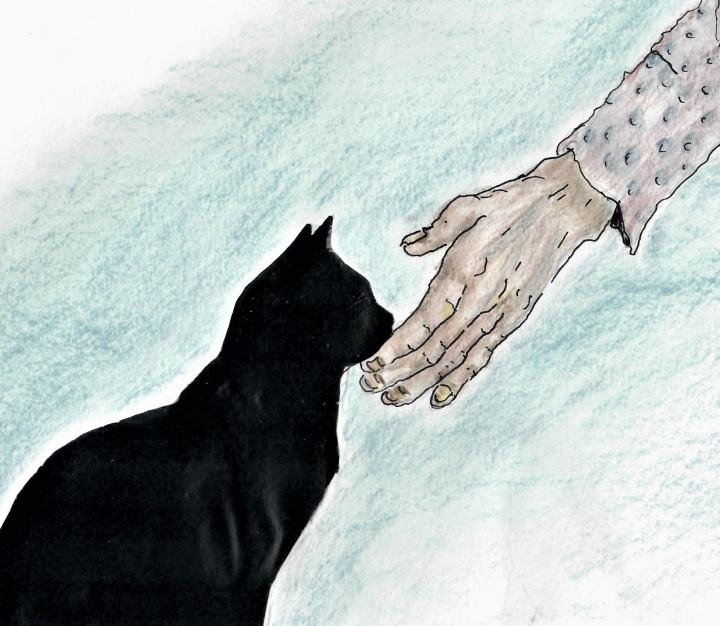 One thought on “A New ZooCatron – Chapter Seventeen: It’s Always Something.”

artofneed
A Ruined Chapel by Moonlight

On Politics, Entertainment and Culture

Words and Pictures from the Middle East & Balkans